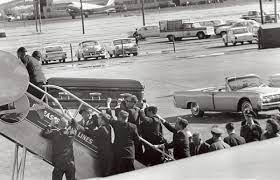 Imagine it is lunch time at the funeral home you work at when you get a call from the hospital two miles away that you need to immediately bring the best casket you have to the hospital.  And, by the way, it is for the President of the United States.

That’s the call that Vernon B. O’Neal of O’Neal’s Funeral Home received on November 22, 1963 — 58 years ago today.  O’Neal happened to be the only person at the funeral home at the time and selected his top of the line unit —  a $3,995 (1963 prices) solid-bronze casket made by the Elgin Casket Company.  The other problem that O’Neal had is that casket weighed 400 pounds and he was by himself at the funeral home.

According to this incredible article which gives much of the “behind the scenes” work on President John F. Kennedy’s post-mortem care, O’Neal eventually got three more people to help him get the casket to Parkland Hospital.

I would suggest you read the article. . . if you were living at the time it will bring back memories.  If you were not living back then, you will see decisions made in a much more innocent world that had not even contemplated this situation.

For me, I was a 5-year old recuperating from a childhood surgery and playing in front of the television at home.  I saw the news report come across the screen and remember going into the kitchen where dad, who was home for lunch, and mom were at the table.  I can distinctly remember giving them the news of the President’s death that I had just heard on our black and white television monitor.

Here’s a little chronology, according to the article,  of what happened when O’Neal arrived at Parkland Hospital with the casket:

While that story is interesting and historical. . . . .the question did remain for some time, “What happened to the original bronze casket that encased the President’s mortal remains from Dallas to Washington, DC?  It wasn’t until the summer of 1998 that archives were released that let the public know of its whereabouts.

So, piecing from this article and other articles written after information was released from the National Archives in 1998, here’s what happened to the casket.

First of all, Gawler’s Funeral Home in Washington, DC, stored the Dallas bronze casket in a warehouse.  In January 1964 O’Neal’s Funeral Home in Dallas billed the federal government in the amount of  $3,995 (according to the article, the federal government felt that this was an excessive price and negotiated a $500 discount from that listed and billed price) for the casket but it is believed that O’Neal preferred just to have the casket back in his possession.  It has been rumored that collector’s were willing to pay O’Neal upwards of $100,000 if he were to sell them the casket.

The federal government paid $3,160 as a paid in full price of the casket (taking an additional 10% discount off the negotiated price) to O’Neal and the General Services Administration took possession of the casket.  And while the House of Representatives passed a bill to preserve all evidence in the Kennedy assassination for evidentiary value, Congressman Earle Cabell from Texas argued that the casket had no evidentiary value and should be destroyed.

The Kennedy family agreed with Congressman Cabell and Attorney General Nicholas Katzenbach agreed that the United States government had the right to dispose of it in a suitable manner.  Here, verbatim, is what the linked article says happened next:

“. . . On February 18, 1966, several members of the Air Force picked the casket up from a secure building at the National Archives just a few blocks from the White House. The casket was placed in an Air Force truck and transported to Andrews Air Force Base — the very place that the casket had originally landed in Washington with President Kennedy inside of it less than three years earlier. At Andrews, the Air Force team from the 93rdAir Terminal Squadron loaded the coffin on to a C130 transport plane.

To dispose of the casket, the Air Force had decided to take it to a place that JFK had once considered being buried: the Atlantic Ocean. Kennedy loved the sea and was said to have considered being buried at sea when he died. Of course, we know that Kennedy was buried at Arlington National Cemetery instead, but for many reasons, the Atlantic Ocean was the perfect place for the disposal of the casket that had brought him back to Washington following his assassination.

The Air Force wanted to ensure the integrity of the casket and not allow it to become a souvenir by someone who happened to come across it floating in the ocean or washing up on the shore. The C130 flew about 100 miles east of Washington, D.C. and descended to about 500 feet above the water. Before taking off, the Air Force had drilled over 40 holes into the casket and filled it with three 80-pound sandbags. It was also secured inside of a wooden crate and sealed shut in a manner so that it wouldn’t break apart upon hitting the water.

At approximately 10:00 AM, the C130’s tail hatch was opened and the casket was pushed out of the aircraft. Parachutes softened its fall and the coffin began to sink instantly. The airplane circled the drop zone for about 20 minutes to make sure that the coffin didn’t resurface, but they had no reason to worry. The Air Force had chosen an area of the Atlantic that saw very little air or sea traffic, and the casket settled in about 9,000 feet of water. The Kennedy Family was relieved that they no longer had to worry about a bloody casket going on display somewhere for the “morbidly curious”.”

So, there you have it.  An explanation of how the President’s body left Dallas in a bronze casket and he was buried in a hardwood casket.  I found it very interesting that over the years people did not pick up on that and ask more questions about it.  That, in itself, is probably reflective of the simpler, and more trusting, times we lived in back then.

May God Bless the memory of President John F. Kennedy.

Here’s a YouTube video of the televised death announcement of President Kennedy that I remember.