Thinking of adding a Crematory? 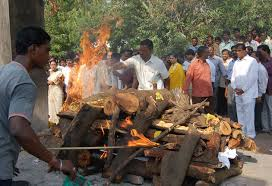 An open air cremation in India

Over thirty-five years as an owner operator of a community funeral home I made hundreds of business decisions.  Some were easy, some were hard, some worked out, some didn’t.  The one common denominator is that I did my research and thought that I was doing the right thing to either help the community or gain financially — and the best decisions were those that satisfied both of those criteria.

One of the best decisions I made was in 2005, to go ahead and build a new mortuary on land we had purchased earlier and move from the building that had served our community since the 1930’s.  One of the decisions that we made at that time was to install our own crematory in the building.  It ended up being one of those decisions that was good for our community and good for us financially – the best type of result.

Yesterday, I read this article from the Business Standard of India pertaining to cremation in that country.  While cremation is different in that country – a majority Hindu nation – where cremation is almost universal and most less affluent families cremate in the open air using wood as the fire accelerant.  The article brings up the idea of cremation polluting the environment.  An issue to think about when addressing the idea of installing a crematory of your own.  When we applied for our crematory at a hearing at city hall we had no opposition but a couple of concerned neighbors.  If you follow Funeral Director Daily or other death care publications you know that will no longer be the case at these types of hearings – it seems that nobody wants a crematory in their neighborhood now.

So, what are some of the practical or community considerations to think about:

You also have some financial objectives to think about:

As cremation services gain popularity, this thought process of adding your own crematory should have serious discussion if your mortuary is 150 calls or more.  Your decisions certainly have the possibility of leading to more client family satisfaction as well as a better bottom line.