I’ve talked about it on this medium many times, but it has affected us all to some extent during 2020.  What I am talking about is the coronavirus and what it has done to our daily lives. . . in this case the social distancing and rules about no large gatherings.  In my opinion, we have all become a little lonelier in 2020.

I’m a pretty social creature and enjoy the give and take of social interaction.  As a matter of fact, pre-COVID, I enjoyed going to our local Caribou Coffee (a truly Minnesota Starbucks competitor), grabbing a large coffee and then just sitting with my iPad or newspaper and waiting for someone to come in that I know so I can visit with them.  I’ve actually had one person tell me that “I’m so friendly that I would talk to a fence post!”  — I don’t know if he also meant I was so dim-witted that I would carry on a conversation with the fence post if it didn’t respond. . .that’s a subject for another day.

However, since Caribou only serves coffee “to go” now, that option is off the table.  And, in going to the grocery store or hardware store you have to wear masks and people are more cautious than friendly, so I get very little interaction there either.  The only places that I have felt “comfortable” in the last three months have been at the golf course – which in my community is open – and at home. . . .I am now playing golf three days per week. . . not getting any better. . . but getting to talk with people.

So, you can understand how excited I was for this past weekend with some of the social distancing relaxed a bit in the state of Minnesota.  Angie and I went to a high school graduation reception and a wedding.  it was a pleasure to get out. . . and just so you understand that I followed all the rules. . . I noticed two local physicians at the wedding also. . and they know the rules!

That is somewhat of a long introduction to the meat of this article, but at the wedding I ran into my friend, Roger Rosengren.  Roger is a retired contractor in my community, who about ten years ago had the desire to build inexpensive, made to order, “pine box” caskets.  He came to me as the local funeral director and asked what I thought.  Well, I had been this route before with retired carpenters who wanted to make urns, caskets, and anything else they thought could make them a little retirement money.

I didn’t sugar coat it for Roger.  I told him that we had a great reputation in the community and we could not afford to lose it by having a handle fall off some casket while carrying it to the cemetery.  I told him we would think about doing business with him, but not until he was able to hold us harmless from that sort of thing with a $500,000 or so indemnity policy to protect us in case one of his units failed.

That fact, and requirement by us, deterred most people. . . but not Roger.  To his credit, he got that taken care of, started building the units, of which we eventually offered, and began building his little company. . . Quiet Waters Casket.

Now, I have not been active in the day to day operations of the funeral home for over 6 years, however, in writing this daily communique I hear from lots of funeral directors with ideas for articles.  One suggestion that I have heard lately is that many funeral directors tell me that the less elaborate wood or wood veneer caskets seem to be going out of their showrooms much more often the the old staples like Oak, Mahogany, and Cherry.  As a matter of fact, some funeral directors have told me that they have replaced those old staples with wood or wood veneer caskets from the Sauder Funeral Products Company.

So, I asked Roger, what his opinion was on the issue. . . and, he agreed with what these funeral directors are telling me. . .”the pine box and simplicity” seems to be what most funeral and funeral/cremation clients want.

From my point of view, I don’t find that hard to believe.  When you look at the American funeral/cremation consumer, choice is important and it also seems to be that price point is increasingly important to them.  Finally, I think that the green funeral movement and the “back to nature” idea of death care has something to do with that increase also.  Not every one will go the way of a green funeral or human composting, but they will be comfortable with getting back to a little simpler form of merchandise.

One of the features from back when I was working daily was that we found we could market the Quiet Waters Casket for both earth burial and cremation.  While our funeral home was about as far away from “high pressure” sales tactics as you could get, we did find an inexpensive “pine box” casket, like Quiet Waters Casket could provide, sometimes moved families from direct cremation to cremation with services and added much appreciated revenue to that case.

Well, another day’s work done and as you read this on Tuesday I should be “social distancing” out at the golf course where I feel at home!! 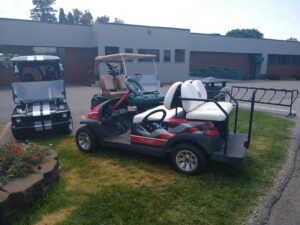 Golf Related:  For those of you that play golf, I’m not very good. . .I’m a 14.8 handicap at present.  My biggest claim to fame in that world has nothing to do with me. . . .I grew up and went to high school with 1996 PGA Player of the Year and former #1 Ranked (1996) Player in the World, Tom Lehman.  He still has a home in town on Lake Darling just off the 2nd hole and you know when he is in town because he drives his cart, instead of his car, to the golf club.  It’s easy to recognize – it’s from the Ryder Cup!!