Is it time for a Preneed registry? 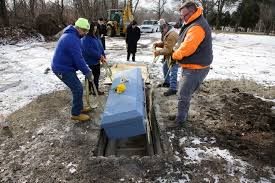 I recently read this story in the Buffalo (NY) News that is entitled, “Two men planned what would happen after their deaths.  Why did they end up in unmarked graves?”  The story documents the plights of two men who, by most death care experts opinion, did everything that they should have done about their future deaths and funerals but whose burials were taken care of by governmental authorities as if they had no resources or no plans.

The article points out that one of the men, Thomas Dudziak, prepaid his burial expenses and left handwritten notes with the funeral home.  He even wrote his own obituary and chose the music to be played during his visitation.  As a veteran he even made plans to have his military uniform be his death attire.  Finally, he gave his funeral director the power of attorney over his affairs.

However, when Mr. Dudziak died, according to the article, he was buried in an unmarked grave as an “unclaimed” person by Erie County.  The only reason this was found out was that his name was listed in a death notice with the Erie County Social Service Burial Unit in the Buffalo News.

The funeral director who was given power of attorney noticed this, called the unit, but found out that he had been buried three days before the death notice appeared.

A myriad of mistakes had happened in trying to locate locate relatives in this case and one other case in Erie County.  The good thing is that, according to the article, “both cases have led to sweeping changes into how unclaimed body investigations are handled.”

As for Mr. Dudziak who was originally buried in an unmarked grave on September 1, he was exhumed and reburied in his proper grave on September 28.  In addition, the funeral director he had chosen arranged for a Patriot Guard to escort the deceased to the proper cemetery.  Finally, the death notice he had himself written was published on October 9, and his Memorial Mass was held on October 24.

Funeral Director Daily take:  I’m guessing that these incidents are not the only times when someone with a preneed account has been unclaimed and buried on the government’s dime. .  . .even though they have plans and financial resources set aside somewhere to take care of this obligation in the manner in which they chose.

Maybe I’m a novice at understanding this, but what happens to life insurance preneed funds that seem to go unclaimed?  If your funeral home has hundreds or thousands of accounts, many paid in full with a single premium, how do we know that some of these accounts may represent people who have already died and, for whatever reason, the account was not accessed?  It could happen, for instance, if the insured had moved and the family used another funeral home unaware that resources and plans existed at another funeral home.

Is it time for a national registry to be set up of preneed funds?  I’m sure that there are funds that have been set up by a funeral home in one city where the insured moved to another city and died.  And, it may be that family or others did not know preneed funds were available.

Maybe this has been done or maybe it is a good idea to do.  How about a registry of preneed funds set up that county governments could check to make sure they don’t make the mistake that was done with Mr. Dudziak?  You would think a group of insurance companies could go about setting up this registry or maybe the National Funeral Directors Association could have a hand in getting it organized.

If this type of check point already exists I would appreciate hearing about it.

Related —  Funeral aid is available — but untapped — in many states.  Pew Trust

Enter your e-mail below to join the 3,038 others who receive Funeral Director Daily articles daily: