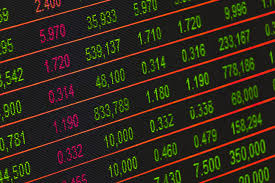 I had planned this article subject for this date simply because we have now finished the 2nd Quarter reports for all seven death care related companies that comprise the Funeral Director Daily Death Care Index (DCI). I hesitated, but then continued to move forward with this report on the public death care companies in spite of pretty negative news from the Jackson Hole economic summit which brought the markets quite a bit south on Friday.

I’ve often felt that when working with public companies stock prices of one day never tells the entire story and I hesitated because of the big loss of market value on Friday.  However, this article does not end up being about individual companies, but the death care profession as a whole so I moved forward with the planned article.

On Friday United States Federal Reserve Chair Jay Powell was pretty blunt about the situation he sees going forward and mentioned there “will be pain” as we move forward.  Here’s how one Seeking Alpha writer summarized Powell’s comments,  “Powell noted in the speech today that fighting inflation will take a sustained period of below-trend growth and a softening labor market, which could bring pain to households, and are the costs of reducing inflation. In the third paragraph of his speech, it’s right there. The Fed is willing to sacrifice growth and face rising unemployment to bring inflation down. He is telling the market there will be no “pivot” anytime soon.”

Funeral Director Daily take:  One might ask why the group of public companies in the death care space have underperformed the indexes in general.  I have my ideas and I will share them with you.  I think some reasons are general business reasons and some may be unique to the death care industry.

First of all, we are in an inflationary time period where it appears that in a general business sense, the cost of doing business, as in overhead, is going up – in the funeral business that’s everything from utility costs to plowing the snow from parking lots.  The 2nd Quarter reports of the death care companies seemed to have a theme of “compressed margins” because of that.  There is also the general issue of employee compensation rising, not only in death care but generally as well.  However, if you have seen some of the help wanted ads for funeral directors which now include signing bonuses, there seems to be a shortage and there is very little doubt that compensation will be rising continuing to put pressure on those death care business margins.

Even more industry specific among investors is the thought process of whether funeral homes have the ability to raise prices without moving some consumers to a lower level of service.  For instance, if a funeral home raises its traditional casketed burial charges, will a portion of consumers then just leave that disposition method for a less costly one such as cremation with a memorial or direct cremation?  It’s an issue that revenue managers have to take into consideration.  As consumers struggle with inflationary pressures in all walks of life, I don’t think death care will be an excluded item in that thought process.

Finally, the public funeral home companies have had really good years during the Covid pandemic.  They should be given credit for their management and how they adapted in the wake of all kinds of issues to serve the public and continue to profit.  However, that is old news to professional investors and it is my opinion that professional investors want to see if there is a drop off in deaths as we move farther and farther past the high numbers of Covid deaths that were reported in recent years.

From my point of view it is an interesting time in the death care business, and especially the funeral home business.  Given the growing options available for disposition, don’t forget about green burials and alkaline hydrolysis, and inflationary cost pressures, I don’t know if we have ever been here before.  Forty years ago we did have high inflation, but we didn’t have the level of lower priced service options such as direct cremations commonly accepted by the public which, again in my opinion, allowed funeral homes an easier access in raising prices to combat cost pressures back in those years.

Funeral homes have always been resilient in bringing services to the public and being able to profit from them.  Over time we have been able to profit from adapting as seen in SCI’s stock price growth of 390% or Carriage Services stock price growth of 315% over the past ten year period    (both numbers according to data from Seeking Alpha). . . a period in which cremation grew dramatically but these companies adapted to profit by it.

Public funeral home companies have historically been seen as a quiet and safe port in the stormy waters of stock market declines.  The changing nature of the business seems to be saying that may no longer be so.

Enter your e-mail below to join the 2,851 others who receive Funeral Director Daily articles daily: