Over the last couple of years that I have published Funeral Director Daily, I’ve written on this topic a couple of times.  “This topic” is that of smaller association cemeteries and the financial plights more and more of them seem to be falling into.  I limit this discussion to “association cemeteries” simply because church cemeteries, municipal cemeteries, veteran cemeteries, and for-profit cemeteries have something to fall back to when the revenues start coming up less than the expenses.

Association cemeteries, which are non-profit by nature, have no financial backstop on their own.

Such is the case as you read this article from the Brainerd (Minnesota) Dispatch.  It caught my attention because Brainerd is a city very much like my own and is only 90 minutes north of where I live in Minnesota.  Matter of fact, our communities are very much alike in that we are both surrounded by lakes and so similar that our communities play in the same sports conference.

A sub-headline of the article is “On life support: Cemetery board seeks support as funds bleed out“.  The article goes on to point out that the board is at a Crow Wing County Board meeting to make sure that government officials know that the cemetery association is now spending more than it is taking in.  As a matter of fact, the Evergreen Cemetery Board – all volunteers – is there to let the county know that for the next five years the annual performance of the cemetery looks to operate with a deficit of about $40,000 to $60,000 annually.

It’s a dilemma.  A dilemma that is not only happening in Brainerd. . . but all over the country.  As a matter of fact I used to serve on the board of our local “association” cemetery — the largest cemetery in our community. . . where a Minnesota governor and two United States senators are buried.  I’ve told our city manager that at some point in time the city needs to be prepared to take over the operations with its manpower and office logistics.

The article linked above notes that the County Board did not want to get fully involved at this time but did find a way to offer a $20,000 contribution.  This also left open the possibility of re-visiting this issue without making a commitment one way or another at the present.

Questions were also asked at this meeting about what happens to cemetery associations in Minnesota that do run out of money? According to the article, there is a clear consequence that cemeteries located within townships would fall to that township if a default occurred.  It is also believed that if a cemetery, inside a city failed, then the city – as the taxing district – would be responsible.

The cause and why we don’t see this situation improving —  This is a real situation in communities across the country.  Cemetery board members in Brainerd stated the following as to the reason for the situation, “a cultural shift away from earthen burials toward cremation is one major factor causing the budget to bleed out. . . . and income from burials has dwindled in recent years.”

As expenses for upkeep continue to rise we just don’t see this situation improving.  The one thing that could help would be the construction of more amenities in the cemeteries such as niches, etc.  However, even though this might help with sales and revenue, in most cases there is no capital to pay for these improvements.  And, cemeteries that are losing money are not great candidates for a loan for this type of capital intense inventory improvement.

Some of these cemeteries actually have some assets, but the assets are caught up in restricted governmental regulation of endowments.  For instance, this Brainerd association has $600,000 in perpetual care funds that have limits on their earning power.

From my point of view, it might be worth the thought of “loosening up” some of the governmental regulations on these perpetual care funds instead of just going to government units for a takeover.  For instance, in Minnesota, perpetual care funds of this kind can be “invested in the same securities in which savings banks are by law permitted to invest” according to Minnesota statute.  That is quoted directly from Minnesota statute and I don’t honestly know what instruments those securities are.  And, the principal cannot be touched – ever.

If it has to be FDIC insured, however, then you are talking of Certificate of Deposit rates of less than 1%.

However, if that $600,000 fund could return even 3% or $18,000 annually, you would think that would be enough to mow the lawn and trim the trees.  Then they could use outside contractors to coordinate burials and dig the graves — which would be paid for by the decedent’s  family.

Or, maybe you could go even further.  Remove the ban on ever touching the endowment corpus which would allow for more “market rate” financial returns.  Yes, you would need to be judicious in your investments, but maybe there could be more leeway.  For instance, the S&P 500 was established in 1926 as the “Composite Index”.  Since that time it has averaged an approximate annual return (to 2018) of about 10%.  See here for explanation.  Again, just a thought.

I’m not a cemeterian and don’t profess to have any or all of the answers.  I just see a problem that needs a solution and I’m not always sure that government take over of association cemeteries is the only answer. 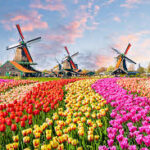 The Netherlands has always had the reputation for not being afraid to try things that are new and different.  This article points out that the country has now recommended alkaline hydrolysis as an alternative to burial and cremation.

According to the article, “This will be the first time in years that a new funeral option is added to the list. The last time was in 1955, when cremation became legal. The Netherlands currently has four funeral options – burial, cremation, the seaman’s grave, and making the body available to science.”

Here is another article from the Netherlands on this decision.