Hillenbrand Industries, parent company of Batesville Casket Company, reported their July through September numbers – which happen to be their 4th Quarter fiscal year numbers, as well as their Fiscal Year End numbers last week.  Hillenbrand showed record revenues both for the quarter and the year.  You can access their financial report here. However, those numbers are somewhat skewed by the additional revenue during the year provided by the company’s acquisition of Milacron.  If you take away the Milacron acquisition […] 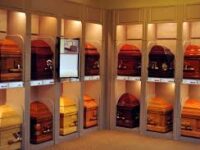 Catching up with the casket business

We are in the period of public companies reporting their 3rd Quarter results to the world and it is only a couple of weeks before Hillenbrand, parent company of Batesville Casket Company, and Matthews International, parent company of Aurora Casket Company will give us those results. As most of you know, those businesses have generally continued to remain profitable even in the face of downward unit sales over the past several years as cremation has cut into the number of […]

On Tuesday global death care company Matthews International announced a sale, that was effective on June 26, of a non-controlling ownership interest in a pet cremation services business.  According to this release from Matthews, the company sold its interest for a total of $57.2 million. That $57.2 million was to be paid to Matthews International with $42.2 million in cash and another $15.0 million in preferred stock of the company, which was not named.  Again, according to the release, Matthews […]

Catching up with Batesville and Assurant

Hillenbrand Industries, parent company of Batesville Casket Company and Assurant, the financial services company that counts it Global Preneed business among its three divisions both reported financial results during early May and we now bring you those results. Batesville Casket, which represents about 20% of the total revenue of Hillenbrand Industries reported an increase of about 1% in revenue for their 2nd Quarter 2020 which encompassed the January 2020 thru March 2020 period.  According to their report, that you can […]

Hillrom leading the charge against COVID-19

On Friday, or maybe it was Saturday, I was watching President’s Trump daily briefing on the coronavirus pandemic and my ears picked up when I heard him him mention some of the companies that were leading the charge against the virus.  One of the companies he mentioned was Hillrom. If you have been around funeral service as long as I have you know that name and you know the history.  I thought today might be a good day for a […]

Swimming against the stream

To understand me you have to understand that I was somewhat, especially when it came to business, a data geek even before data and the term “data analytics” became in vogue.  When my wife and I were married in 1988 – and I was hatching all kinds of business opportunities outside of the funeral realm, my wife once told me, “When you die, I’m going to bury you with a calculator in your hands.” On that wave I just started […]

Hillenbrand Industries, parent company of Batesville Casket company reported earlier this week that Batesville’s fiscal 4th Quarter sales (July, August, September) were essentially flat from the prior year.  You can see Hillenbrand’s 4th Quarter and Year End report here. Hillenbrand Industries reported quarterly revenue of $486 million — an increase over 4Q 2018 of 2%.  They also reported that the growth was spurred by an increase of 3% in their Process Equipment Group while Batesville  revenue was “essentially flat”.  Of […]

Earlier in May both of America’s leading casket companies reported their 2019 fiscal year 2nd quarter financials.  Those companies, Hillenbrand, which is the parent company of Batesville Casket Company, and Matthews International, which is the parent company of Aurora Casket Company, reported declining sales of caskets.  You can see Hillenbrand’s 2Q report here and you can see Matthews International’s 2Q report here. Here are some of the things that were reported on Hillenbrand: Hillenbrand had revenue of $465 million for […]

Have You Seen Coffin in a Box?

My wife and I enjoy going through the Ikea store near Mall of America in the Minneapolis suburbs.  Virtually everything we find there is not only modern and up to date, but we can purchase it for a discount in a box, bring it home, and put it together.  We not only get a great piece of furniture but we save money to boot. I recently discovered a company from the Netherlands – Coffin in a Box – that produces […]

Australia’s LifeArt Coffins on the Market

The other day I was doing some research for the “Finance” portion of Funeral Director Daily.  I like to search public companies world-wide who compete in the death care space and learn where I might be able to make a good investment for the long haul.  In any regard, I was researching InvoCare Limited, Australia’s largest provider of death care services and learning more about them. While doing that research I came up with a division of InvoCare that I […]